A friend of mine told me the other day, it’s only 3 weeks until Spring.  I thought about it, and yes, she is quite right.  Mind you this was on a day where it was like 10c | 50f and it was cold, wet and windy.  So yes even though spring might only be a few weeks away, we are still in winter even if at the end of it.

Today however you could feel spring on it’s way. It was sunny, and surprisingly warm(ish for winter that is).  I’m not complaining, compared to the last few days we had it was delightful. It also made it perfect conditions for today’s club run the S & K Watson Handicap.

Last year this run was sealed and it was also a championship race.  Don’t ask me how the ‘championship’ thing works cause I’m only just learning all of it. Anyway, this year it was based on handicap.

My start time was 9.30 minutes. A group of 5 runners were ahead of me at 9.00 minutes. To be honest I had no idea how I was going to go on this particular run, I just decided to give it a go and see what happens.

Well those group of 5 runners, I passed 2 of them just before the 1km mark.  500m later I had passed another 2.  By the 2km I was in the lead.  Just because I was in the lead didn’t mean I could take it easy, I had to 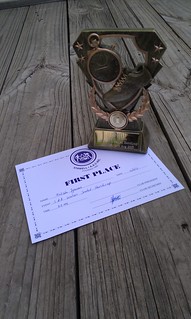 take into consideration those faster runners, which could easily get me at the end.  So I powered on. At each turn I would have a quick glance to see who was behind me and if so how far, I couldn’t see anyone.  I may have just have this.  Then I saw it, the finish line was in site, I picked up the pace some more and powered home in 1st place. A win!

I didn’t have anything to fear, the next person was a good 30 seconds behind me. Overall it was a female trifecta, which hasn’t happened in a while.

Now let me tell you a funny thing. Last year I won this race. In a time of 23:43, which was a pb for me. One year on, same course (better conditions), and I win again, but slash another minute off my time in 22:44. Which yes is another pb for me for 5km.

So all up it was a great day.  Tomorrow I have another run.  Not going to aim for a time, just going to run and have fun.

1 – I’m the secretary of the Stawell Amateur Athletic Club (aka SAAC), so I have/need to know how things like this work, which is why they are teaching it to me.