You have been warned – this could be a long post.

I first found out about the Portland 3 Bays Marathon via some running friends at our local running club.  I really wanted to do another half, but I couldn’t decide when or where I wanted to do it.  It wasn’t until the colour run registrations opened that I decided yeah why not.  So I booked in to do the half marathon at Portland, and also to do the colour walk with the family as well.

My running preparations started months ago.  I did my last long run about 3 weeks before the race.  For whatever reason that run took a lot out of me.  I’m not sure, but it took me a good week to recover from me.

Then I got sick.  Thanks kiddies.  Miss K got bronchitis, and gastro (the bronchitis overrided the gastro), who then gave it to her brother Master M, who thus gave it to me.  Yeah good thanks kiddies.  So when race day came around I had no idea how I was going to go considering the weekend before I had the beginnings of the gastro bug.

Portland is a great town to visit.  But if you do visit, word to the wise, bring water, or buy it.  Why? Their water tastes AWFUL, and I seriously mean HORRID!!! Besides the water, we had a good relaxing pre race day.  The Upwelling Festival was on the Saturday (they coincide it on purpose to get more tourists in), and their were jumping castles, and face painting, a parade, market, music, and installations.  It ran all day and we enjoyed it.  Except the vomiting part, but that’s another story (don’t worry not me).

The half marathon started at the half way point of the full marathon, which was over in Bridgewater, which was the 2nd/3rd bay point (see map below).  This meant that the half marathon runners (like myself) had to take a bus out to the start line.  Pick up times were starting at 8:45am for a 9:45am start, but we had to be at our pick up location (which was the finish line) from 8:15am.

I sat next to a man from New Zealand, we had a great chat about different runs we have done, stories, training, and hills.  I was telling him that we drove part of the full marathon course the day before (as we driving to Bridgewater to see the Petrified forest), and let me tell you there are some nasty hills on that section.

I will have to say that running a course that is one direction is and can be a little daunting.  In fact I have only ever ran a course that was a loop or laps.  So running this course was interesting for me, for the pure fact that it was one way.

However at the same time, it was good to drive the course (as we didn’t drive this section of the course the day before, only part of it), to actually see what it would be like, and to also see where the water stations were.

When we arrived at Bridgewater off to the toilet I went.  Yep a queue but the race was still another 30 mins away so waiting didn’t bother me.

When the 2nd bus arrived friends from my running club were on there, so it was good to catch up with them, and see how they were going.

Once all the bus loads of runners/walkers/relayers had arrived we made our way the the starting point, which was the half way point of the full marathon, which by the way is on a hill! We also got to see the lead marathon runners come through, which of course we cheered on.  One of those runners was Susie, who is in our club.  This woman is a machine! I mean you would be if you complete in Ironman’s.  She was funny though, cause when she saw us, she just stops running and decides to wait at the half way point until we were ready to go.  How awesome is that!  She wasn’t in it to win it (she still came 2nd), but the fact that she was there for a more social support was awesome (she also ran with her daughter who was competing in the half).

The time arrived for us to start.  Because of the hill and the congestion of all the runners I did not go flat out.  The race official state that one year one runner when out too hard on the hill and pull his hamstring.  I did not want that to happen to me. So km 1 was at a very slow pace of 6:48.  Which for me is very slow.  Being one minute behind my pace meant that I may not make my sub 2hour time (if I kept at that pace).  Once I was over the hill, I felt good, and ran at a 5:20 steady pace for 7km (which is how long it took me to gain that 1 minute back).  I kept that pace until about the 15km, where i did start to slow down, to a pace of 5:30.  However at this point, I was ahead on my pace, so aim for my sub 2 hour time.

It was also quite hilly.  Now I don’t mind the hills, but the hills seemed to be constant.  Up one, down one, up again and so on, but a hill is just a hill and I will get over it.

So the image above is the elevation gain/loss according to my garmin.
As you can see hills.

Now there was this woman infront of me, wearing a purple/lavender/lilac shirt.  It was like we were playing cat and mouse.  She would overtake me, then I would overtake her, and vice versa.  However by the 17km mark, I was starting to tire, and I just couldn’t keep her pace, she got further and further way from me (in the end it was only about 100-200m). See below to see my pace times, and how I was slowing down.

By the 18km mark I could feel my legs starting to tire out, but I pushed through.  At the last water station (18km mark) I couldn’t even say I wanted gatorade.  They were like water or ‘gatorade. I just pointed to the gatorade.  That mouthful really helped.  Also seeing the sign “last hill, we promise” helped too.  The hill wasn’t steep or long, thank goodness, but I was slowing down, I was tired.  But the combo of the gatorade and the smidge of a lolly I placed in my mouth helped.

So I ran, my pace didn’t pick up as much even though I was going downhill, but I could see the finish line. So I just kept putting one foot infront of the other.  Then I saw the family.  I waved, and that pushed me further.  Then I could hear the cheer of the crowded, which helped me to push that bit more.  Then I heard my name and my finish time.  I did it I crossed the finish line. 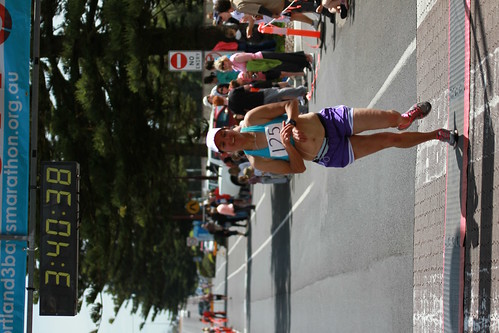 (Yes I’m aware the above image is sideways, but it’s direct from the Portland 3 Bays Marathon Flickr page. ) 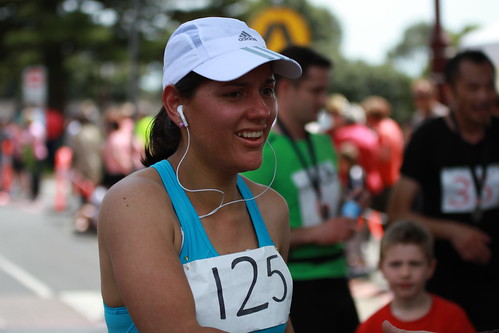 So I smashed my previous half time taking 8 minutes off it.  Yay me. Overall It was a great event.  Next year will be their 30th year anniversary.  Will I be racing? Quite possibly yes.