Last year as I was picking up my race kit for my 1st ever half marathon I saw all these kids, and thought to myself, what on earth is going on.

I later realised it was the kids event of Run Melbourne.

I honestly don’t know how I did not know or realise that they had advertised a kids event, but they did.  So when registrations opened for RunMelbourne 2013 back in December last year, I decided to enter the kids.

This year Marvel came on as a sponsor for the kids event.  It was all about joining your favourite super hero and having fun in a physical activity and challenging yourself in a team environment.  Kids aged between 4-7 had to be accompanied by an adult.  So I ran with Miles (cause he is a mummies boy), and Tom ran with Kayla.

Because I entered the kids the day entries opened the kids got free racing bibs.  They however did not want to wear them.  So us adults wore them instead. 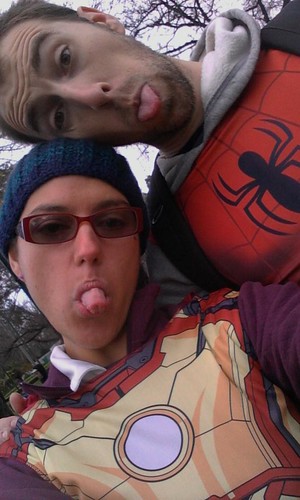 It was cold at the start line, but we were patient, it doesn’t mean we got a bit crazy. 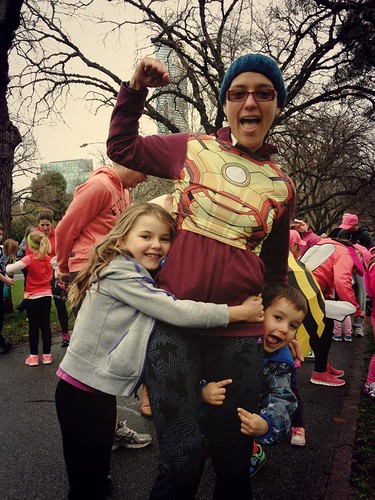 Don’t get me wrong I’m all for the whole superhero thing. But they could have at least put one female superhero. We got to choose from: Team Spiderman, Team Ironman, Team Hulk and Team Captain America. Would have been cool to have Team Wonder Woman, or Team Electra or Team Storm. Yes I’m aware there of Spider Woman, American Dream and She-Hulk, but it’s not the same.

The race got underway pretty much on 10am on the dot.  I had the camera so I took photo’s of Miles and I on our race adventure.

I’m glad the event was not held any later than 10am. As it had started to drizzle lightly when we started. By the the time I got to the finish line Miles the rain was thickening up.
After a trip to the cafe for morning tea it started to really pour down. I left the kids with Tom and collected my race kit and made my way back to the car. I was cold and wet by the time I got there 15 minutes later. The kids would have been soaked through if they walked back with me, so it was easier to keep them at Federation square where they could have fun and keep warm and dry.

Overall we had a great time.  I’m glad we popped into Big W Friday night to pick up some rain jackets (as the kids didn’t have any that fitted), as we ended up needed them.

Kids loved getting their medal at the finish line. They definitely earned them.

If you would like to see more photo’s of our Run Melbourne adventure go here.

If you would like to see stats of Kayla’s run, go here.

If you would like to see stats of Miles’ run/walk, go here.