I would have written this post yesterday.  I had the full intentions of doing so.  However I was pooped.  So alas it didn’t happen.  But because I’m forward thinking I moved my Motivational Monday post aka July Challenge week 4 to tomorrow so I could make way for my race recap today.

I guess it could also be classified as a motivational post anyway. But lets get to the race recap shall we.

The alarm was set for 5:15am. A sleep in compared to me running it last year. However my body decided to wake up at 4.30am. Yeah good thanks.  Oh well it happens, I will deal.

My gear was already laid out.  I put it all on, double checked my bag, had my breakfast and got in the car and went.

This year I decided to park at the Arts Centre.  Last year I parked just opposite Federation Square, but because the route had slightly changed this  year I wasn’t sure if the road would be closed.  Better to be safe than sorry.  Hence the Arts Centre.  I think parking was cheaper there than where I parked last year anyway.

One thing for sure, this year it was a lot colder than last year. I’m glad I brought extra clothes with me and changed my outfit.

This is the only photo I took  :(. By the time I got down to the Runners World VIP tent, and walk back up, I had missed the warm up 🙁 and then it was a matter of going to the start line and finding my pace group.

Every runner has 2 times they aim for.  I had 1h45m (dream time) and 1h50m (realistic time).  I decided based on my running problems lately to go with 1h50.  That seemed doable considering considering my last half time was 1h52m36s.

As I said previously the course was slightly different to last years. This years course map looked a little like this. 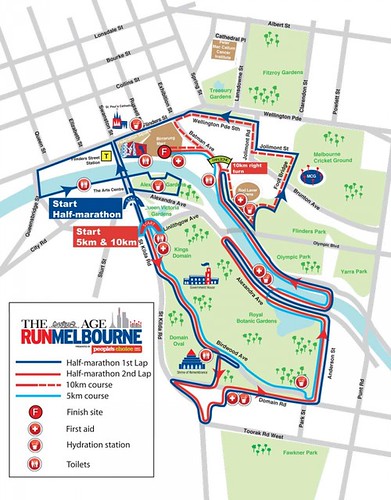 The gun went off and the 1st wave started, it was slow going to the start line, as there were a lot of people (as you can see from the above picture).  I also knew that a lot of people were going to go full pelt at the start.  I had a game plan in mind.  Before I got to the first corner (not even 100m in), I introduced myself to the pace leader.  His name was Kevin. I also introduced myself to the other lady who was running with Kevin.  Her name was Tara. There was another pacer for that time group, but I didn’t get his name and didn’t end up running with him.

If you  have never ran with a pace group you should.  Seriously they are fantastic and really knowledgeable.

It’s weird, because I made a playlist for Run Melbourne weeks ago.  (I will create a new post in the coming days with the list for you, if you are wanting new music to run too).  I even fine tuned this list just days ago.  However I kinda made up my mind somewhere along the line not to run with music.  I ended up only listening to half a song, before I turned my iPod off and put it away.  That’s right, I put it away!  I didn’t need the music to get me through this run.  And I’m glad I didn’t have to rely on the music to motivate me. It’s also possible that running with someone aiming for a specific time goal also encouraged me not to rely on music as motivation.

Chit Chat with Kevin & Tara was great.  I didn’t notice the distance passing by. Weird? Possibly. Could it have been that I was familiar with the course already? Another possibility.  Either way, I still had a very enjoyable run and race.

At the 10km mark Tara tripped and fell  over :(.  Kevin stopped to help her and to get a Marshall to call first aid, as she grazed her face. I do hope it didn’t rattle her too much and that she was able to finish her race.  I didn’t see her again after that. Trips and falls happen, you just hope that they never happen to you.

Just after the halfway point there was a water station, which I stopped for to get a drink.  As I was throwing the cup away and bit of water (I kid you not) jumped out of the cup into my mouth just as I was inhaling.  Yeah no joke.  Could only of course happen to me. At least I can laugh about it.

On the hill coming towards Federation Square (Flinders Street – see above map), I lost Kevin :(.  The combination of having a snake lolly and going up hill for what ever reason got to me and I just couldn’t keep up with him. Once I got up past the hill and around Federation Square which was approx the 13km mark I tired to make up for lost time, but  his balloon just kept getting further and further away.

Runners World kindly however had pace bands, which I had on my wrist, which I would check at each km.  Even though I lost Kevin, I was still on pace.

At the 16 or 17km mark I decided to have my Endura Gel.  It hit the spot (I much prefer the Endura Gel’s over the Gu that’s for sure). It was at this stage that Kevin passed me (going the opposite way, along Alexandra Avenue), we did a quick ‘hello’ and kept going.

Once over the bridge and then under the bridge I was on the last stretch.  Kevin at this stage even stopped and waited for me to run the last part with  me.

I tell you what I’m glad that I did the Kids event, because I had the upper hand of knowing the last part of the course. It was I who was telling the pace leaders,  no this is it, once we come around this bend there is the finish line.

I picked up the pace and on the home run (which was not uphill like last year), and went for it.  I crossed the line in 1hr49m24s.  A new pb for me.  Can we have a WooHoo!

After grabbing my water, my medal and my finish pack, I headed back to the Runners World VIP tent for a stretch, then a massage.  I also had a lovely sandwich, mini muffin and a hot chocolate. 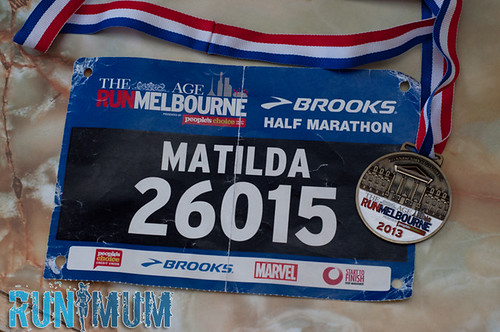 A huge thank you to Runners World and making me feel special in the VIP tent, but also organising pace runners.  Thank you Kevin, you helped me get a new pb.

Another huge thank you to everyone that helped put together RunMelbourne.  It truly was a fantastic event.  I think I will be running it again in 2014.