So we all know that I have been having drama’s with my shoes.  If you didn’t you can read about it here or here.

So while I was down in Melbourne visiting my family I thought it would be a good idea to visit the running shoe shop.  Now I had a choice of which store to go to.  When I got my Kayano’s I got them fitted here. This time around I decided to go to The Running Company in Geelong. Why this store?  Well why not?  Geelong was no more closer than the other store, but I chose The Running Company because it meant not having to go to the city, and then stress over parking and what not.  Also I saw the range that The Running Company had when I was at the Geelong Half Marathon (you can read that here), and I was impressed, that’s why I decided to go there.

Now I’m not one to buy things on a whim.  I like to do my research, and believe me, I did my research.  That being said though, you can do all the research in the world, but you may not end up picking what you think is right for you.

A pair of shoes can change your life.  Just look at Cinderella.

Anyway, I arrived at TRC in seriously daggy gear… I mean tracky pants, t-shirt and a jumper… I was looking like a bum, but I was a comfortable (bum).  I did do my first session of yoga that morning too, so I was a bit on the pooped side.

It was then time for trying on shoes! Woohoo Shoes!

First up was a pair of Brooks Pure Cadence 2, then a pair of seriously bright (you will never loose me) fluro orange Nike’s (I think Lunaglides, I can’t remember if this is correct though, they could have been Anodyne’s). Last were a pair of Saucony Hurricane’s. 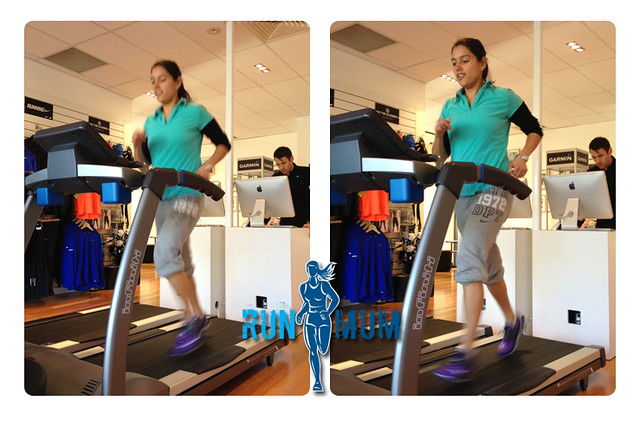 Each shoe was radically different.

The Brooks were a 2mm shoe (whereas my Kayano’s are a 12mm, if you have no idea what I’m talking about it’s the heal to toe ratio to the ground, the lower the number the lower the heal is to the ground).  They were very light (and I loved the colour), and I was surprised at how well they fitted my feet, well compared to the Kayano’s that is.

With the Nike shoes, even though they were very bright, and orange (love), they felt really heavy in the heal.

They were also a 12mm shoe, and let me tell you, you can tell the difference in the drops.
The Saucony they were also a great fit, they weren’t such a low drop like the Brooks, but not as high as the Nikes.

They are set at an 8mm drop.  The Saucony’s were a good shoe, and I liked them a lot better than the Nike’s, but there was something about the Brooks.  I popped them on again, and had another run.  Yep, these were the ones. These were the Cinderella shoes.

So the Brooks Pure Cadence 2’s where the winner.

All up I spent about an hour in the store, but the service that I received was outstanding service.  Yeah I could have purchased these shoes online for so much cheaper, but there would be no way I would have gotten that type of custom service.

Seriously I will be going back there again for sure.

The next day I got to try out my new shoes.

It wasn’t a super long run, but wow, what a difference. They felt so much lighter. I felt no rubbing on my toes or the soles of my feet.

Being a low drop shoe aka a minimalistic shoe I didn’t want to overdo it on my first run. My next run however didn’t end up being until 5 days later. I got hit with (another) cold (thanks kids – I still love you though). Monday I thought I was dying, I had no energy, and everything felt like a fog.

Fast forward to Thursday (which yes was also my birthday), and I got to run in my new shoes again (a present to me from me). Oh what pure joy.  No more clop clop like a horse, and best part, I didn’t have ugly feet after my run. Woohoo!

The (pink) kayano’s have been retired to just walking now (and possibly the next tough mudder).  They have been a great shoe, but obviously now they aren’t.  What I find incredibly interesting is that I’ve naturally gravitated to the minimalistic shoe.  Which is essentially one step behind barefoot, which is it a coincidence?  Maybe, who knows.  All I know is that I’m happy with my purchase, and so are my feet.